So it has been a while since my last post.  Even though I've been extremely busy I've fit in a surprising amount of flyfishing related activities lately which I'd like to get into at some point.  I just haven't felt like posting lately.  I do hope to get back into the groove of posting again.

I'd like to discuss divers.  Quite a while ago when I first thought about fishing for pike when pike were still fairly new to the state of Maine I did some research into pike flies.  I came up with a few must have flies like bunny bugs and mega divers.  So I sat down at the vise and whipped up some standard, book versions of these flies along with some odd variations that came to mind.  The bunny flies caught fish although not many due to lack of knowledge and probably skill at the time but I could not catch fish on the divers.

I waked them on the surface and also made them dive slightly then let them float back up to the top on a floating line.  I swam them deeper with sinking lines.  They just did not produce for me.

This winter I wanted to change that and tied up some divers in a couple different color combinations.  They looked good coming off the vise but the fish are the real critics.  Here is a sampling of my creations. 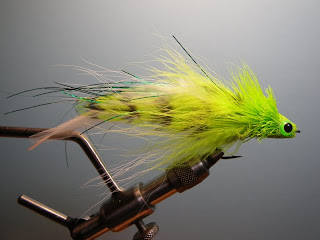 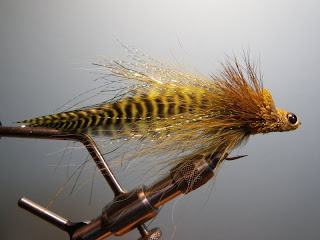 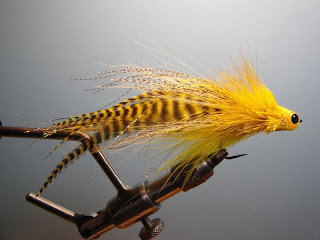 This past weekend I had a chance to get out and after a slow start with some of my usual go to patterns I decided to put on the chartreuse diver and give it a try.  After a few casts to get the fly wet and fishing I took a small pike after a nice, visual strike. 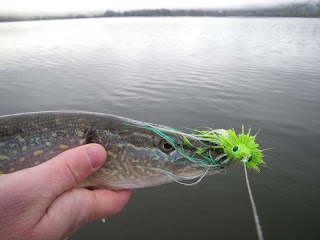 The strikes were frequent after that with some impressive missed ones.  About 3 or 4 more fish were brought to the boat.  I was on to something with this fly.

The boat was moved to allow casts to be made to an edge bordering deeper water.  During one of the first few casts to this spot, a pike of unknown size took the fly and cut right through my 50# flourocarbon tippet leaving me without the hot fly.  I barely felt the strike.  Guess I'll have to go to wire or put up with a few lost flies along the way.

The action was fun while it lasted but the other divers didn't produce like the first one and after a while I started switching to some other types of patterns.  I do have some new found confidence in the divers and plan on stocking up on them for future trips.  I have so many flies I tied up this past winter I couldn't resist putting them on and giving them a swim.  I took one small pike on a 12" articulated musky fly.that I didn't think any pike would take a shot at.  Those pike are sure vicious predators.

I'm still learning about pike and found a lot of fish in a little bit different location this trip out.  The water temp was about 50 F with overcast skies and the pike seemed to be pretty tight to cover like old weed edges, brush and other woody bushes.  Normally early season the pike can be found very shallow spawning but by the time the water warms up this much they seem to move deeper.  Maybe they are in a transition period.

This fly is more typical of the stuff I usually fish and I happen to like the way this one looks and fishes. 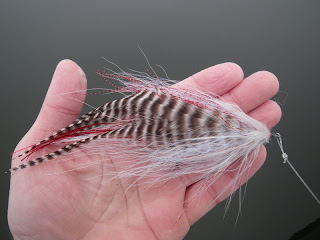 I was fishing with John again today.  I hardly fish with anyone else since he is one of the few people that can put up with me for the day.  He was able to catch the best pike of the trip and a nice, chubby bass getting ready to spawn shortly. 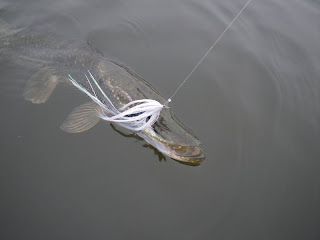 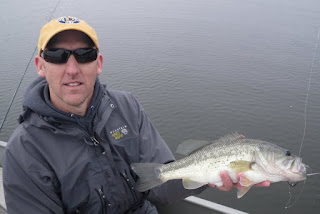 The blackbird continues to be my favorite and most consistent night fly.  The ones left in my box from last year had rusty hooks and were starting to look pretty beat up and scraggly.  I decided to tie a few fresh ones up for myself and for some friends hoping they will have some of the same success I've had.  I added a picture to the Striper Flies page. 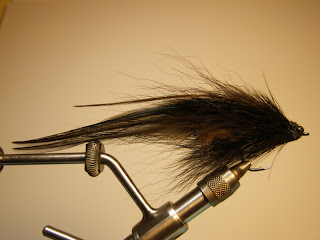 They look a little creepy head on. 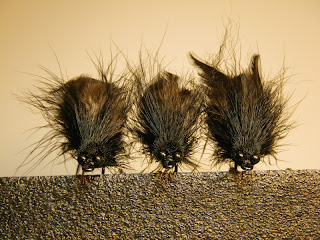 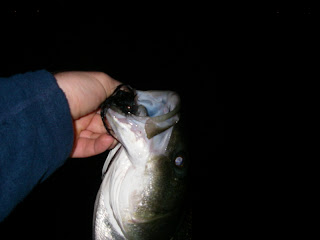 Got together for another Thursday night tying session with some friends.  The highlight of the night was homemade regular and peanut butter whoopie pies baked by Mike's wife who also happens to tie flies.  Chad and Alan worked on some soft hackles again.  I was planning on joining in but got distracted and started spinning up a big tandem muskie fly and went on to tie a few more muskie and pike patterns afterwards.  Once I get going on the big stuff I have a hard time pulling myself away.  I'll show some of what I've been working on another time.  Here are some of soft hackles.  I'm not sure what they are called and if most of them even have names.  They trout don't seem to care. 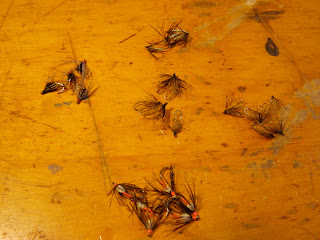 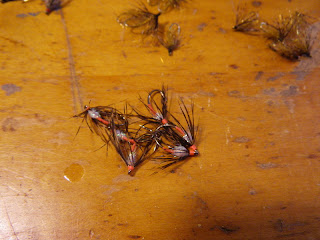 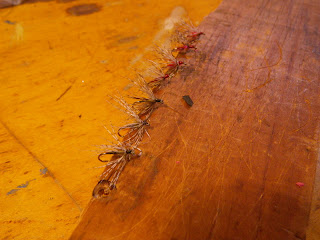 Mike worked on some monstrous versions of a foam fly I showed him at Eldredge Bros. Flyshop last Sunday.

I think they came out pretty well.  It will be interesting to see how they perform on the local largemouth bass. 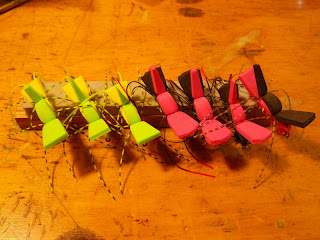 Some of my favorite blogs